The History of the Martini Cocktail

14 Oct The History of the Martini Cocktail

Posted at 15:33h in Food History by Tech Support

Over the years, simple cocktails have evolved into unique beverages that radiate bursts of color and singular punches of flavor. From the monochrome cocktail and mudslide cocktail all the way to the fireball sangria and the deep blue vodka punch, mixologists never fail to impress us with their out-of-the-box concoctions. While the cosmopolitan world of cocktails has been saturated with exquisite drinks that walk in sync with the fast-paced hustle and bustle of the 21st century, there are still a myriad of classic drinks that will never go out of style. No matter how much time passes and no matter how many new cocktails pop up on the scene, there is one particular cocktail that has stood the test of time and remains a popular choice of many, namely the Martini. 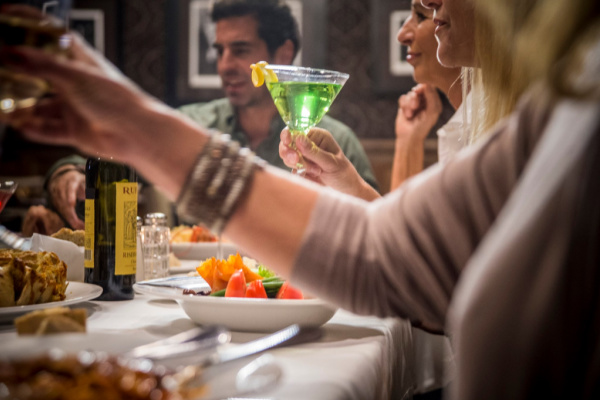 What Is a Martini?

The Martini is a classic cocktail that has been ordered, mixed, and served all over the globe for many, many years. A classic Martini is made from gin and vermouth and garnished with either an olive or lemon twist. It has a reputation as one of the most popular mixed alcoholic drinks in the world. Drink it straight or on the rocks, this cocktail will always exude elegance and style.

The famous American journalist H.L. Mencken once referred to the Martini as “the only American invention as perfect as the sonnet.”

The Martini’s Mixed Up Mixologist History

Even if the Martini is considered a truly American drink, a rather unknown theory puts its origins in Europe. A German musician, John Paul Aegius Schwartgendorf, emigrated to France in 1758 and changed his name to Jean Paul Aegide Martini, in line with the vogue of Italian composers. Apparently, his favorite drink was a mixture of gin and white wine, which became known among French musicians with Martini’s name. Some of these musicians may have emigrated to the United States, bringing the drink called a Martini with them.

But it is in the U.S., and specifically in California, where most of the myths and origins of the Martini take form.

One of the most frequently cited theories is that “Professor” Jerry Thomas, a famous and influential 19th century bartender, invented the drink at the Occidental Hotel in San Francisco, sometime in the late 1850s or early 1860s. As the story goes, a miner, about to set out on a journey to Martinez, California, put a gold nugget on the bar and asked Thomas to mix him up something special. Thomas produced a drink containing Old Tom (sweetened) gin, vermouth, bitters and Maraschino, and dubbed it the “Martinez” in honor of the customer’s destination.

A similar theory is supported by the citizens of Martinez, California, who nevertheless suggest that the miner’s journey took place in the opposite direction. Sometime around 1870, a miner stopped on his way to San Francisco at the saloon of Julio Richelieu in Martinez, and paid with a sack of gold nuggets for a bottle of whisky. The miner complained that this wasn’t quite enough for the amount of gold he had given, so the bartender made up the difference by mixing up a small drink of gin and sweet vermouth plus bitters and an olive, which was called the “Martinez Cocktail.”

What is important to keep in mind is that, even if the Martini derived from the Martinez, the cocktail evolved so much in the first decades of the 20th century that it sort of became something different. Remember that Old Tom was a sweetened gin, quite unlike the dry London gin of today, the vermouth was of the sweet variety, and the cherry liquor in the Thomas version further sweetened the drink. Some theories to explain the origin of the Martini base it on its name, giving less importance to its ancestor with the “Z”. 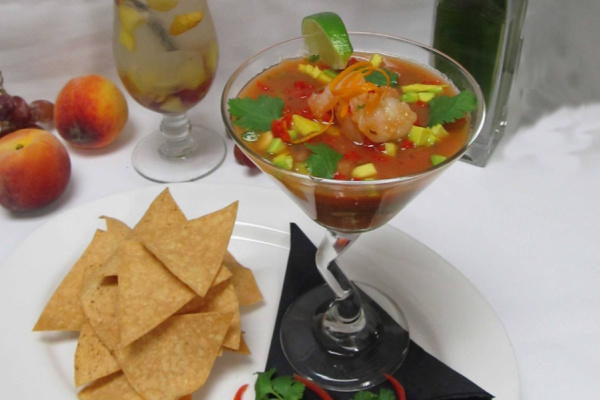 But, why and when did the name change from Martinez to Martini?

Some connect the name “Martini” with the Italian vermouth company Martini and Rossi, which in 1871 shipped 100 cases of sweet vermouth to New York. This theory, which has often been dismissed because the shipping happened years after the creation and popularisation of the Martini, might connect with the moment when the name changed from “Martinez” to “Martini.”

An old cocktail recipe book, The World’s Drinks and How to Mix Them, copyright 1907, gives the recipe for a Dry Martini Cocktail from a Los Angeles bartender (does not give name of bartender or location). Made with gin and dry French vermouth, served with lemon peel and an olive, this recipe includes two dashes of bitters but otherwise is similar to a modern Martini.

Some New York sources insist that a bartender at the Knickerbocker Hotel, named Martini di Arma di Taggia, invented the Martini in 1911 for America’s first billionaire, John B. Rockerfeller, co-founder of the Standard Oil Company. True or not, it seems to be the first time the Martini made its way to Wall Street and then Madison Avenue where the “three Martini lunch” (think Mad Men) was a standard among executives for decades. (By the way, Rockefeller’s Martini was made with London Dry Gin, dry vermouth, bitters, lemon peel and one olive.)

The first reference for a vodka Martini in the U.S. was in a cocktail recipe book in 1952, Bottoms Up by Ted Saucier.

Whether it sprang from San Francisco, Martinez, Los Angeles, or New York, the popularity of the Martini waned (along with all cocktails) in the wine- and spritzer-focused 1970s. But it regained prominence in the late 1980s when the newly-popular vodka, Absolut, abetted by a creative advertising campaign, replaced gin as the base spirit. The vodka Martini became the rage.

By the 1990s, popular variations proliferated: the green apple Martini (appletini), the chocolate Martini, and so forth. Specialty menus featuring more than a hundred varieties of Martinis appeared from coast to coast.

James Bond and the Martini

The American cocktail crossed the pond and got written into Ian Fleming’s fiction in the 1960s.

In the first Bond novel, Casino Royale, his recipe is specified as three measures of Gordon gin, one measure of Russian or Polish vodka, and half a measure of Lillet aperitif wine, shaken until ice cold, and with a large thin slice of lemon peel for garnish. This variation is properly called a “Vesper,” after his love interest in the book, Vesper Lynd (who perishes by the end of the book). By the second novel, Live and Let Die, Bond is drinking vodka Martinis, a trend that continued when the first Bond film, Dr. No, was made in 1962. 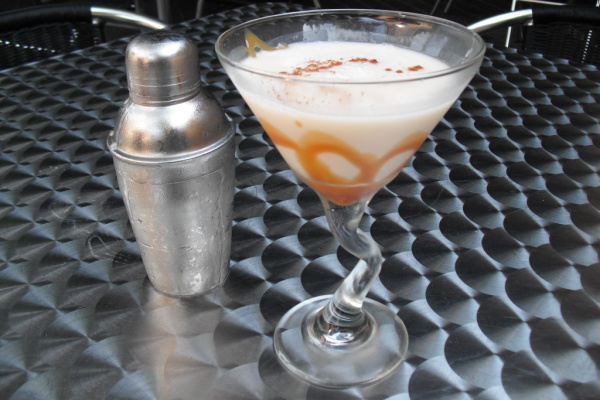 Ever since Bond ordered his first Vesper shaken rather than stirred, debate has raged between Martini posts about the best way to make the drink. Unfortunately, there’s no definitive answer to the question.

Historically, early recipes for the Martini have varied between stirring and shaking, so tradition is no guide. There are advantages to both methods, too. A properly shaken cocktail (a handshaker with lots of ice) will chill a drink down to 5 degrees Fahrenheit in fifteen seconds, to get down to the same temperature by stirring takes twice as long and depends more on the quality of ice you are starting with. Since cocktails are best enjoyed very cold, shaking has the advantage here. Stirring wins as far as visual appeal goes, though a shaken drink will emerge cloudy with bubbles and festooned with tiny chips of ice, while a stirred drink will pour out looking like a jewel.

To many Martini aficionados, the traditional way to create a Martini is to mix all the ingredients in a mixing glass, not shake them in a cocktail shaker. This is so as not to “bruise the gin” (the “stir followers” believe the shaking action breaks up the ice and adds more water, slightly weakening the drink and altering the taste). It was the great British novelist W. Somerset Maigham who declared, “Martinis should always be stirred, not shaken, so that the molecules lie sensuously one on top of the other.”

Rather than insisting that one method is the only right way, perhaps it’s better to follow the advice of David Embury in his classic book, The Fine Art of Mixing Drinks. If you want a visually appealing Martini, stir. If you want it to be as cold as possible and don’t mind how it looks, shake. And if you don’t know which you prefer yet, you can always try it both ways.

Dirty Martini: Add a small amount of olive brine to the mix

Gibson: Garnish with a cocktail onion

The Martini is Our Most Political Drink

No cocktail is as tightly intertwined with politics as the Martini. It was the first drink of the day for Gerald Ford when he was a member of the House. And it was Richard Nixon’s last before he stepped down as President. It’s the only proper order in Washington DC’s most historical political haunt, Off the Record, in the Hay-Adams Hotel. There it’s served with no frills because, as longtime barman John Boswell once told the NY Times, “John McCain doesn’t want a razzle dazzle Martini.” 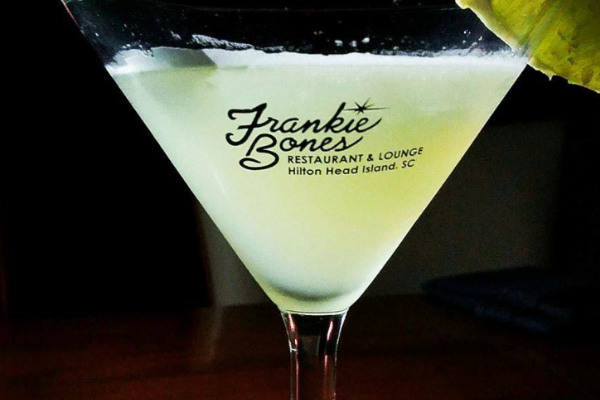 During the “Mad Men” era, the Martini became symbolic of tax write offs for wealthy businessmen. But there was a backlash from the working class. The war against the “three Martini lunch” started with John F. Kennedy, but the first major clash was skirmished by George McGovern in 1972 when he said: “There is something fundamentally wrong with the tax system….when it allows a corporate executive to deduct his $20 Martini lunch while a working man cannot deduct the price of his bologna sandwich.”

If there’s anything that the 1970s were more notorious for than disco, it’s inflation. By 1976, Jimmy Carter was famously railing against the working class subsidizing the $50 Martini lunch.

Carter failed to push through three Martini legislation but Reagan pulled it off in 1986 reducing the meals and entertainment write-off in exchange for lowering the business tax rate. Clinton later finished the job further with deductions on deductions. By the time he was done, the three Martini lunch made as much business sense as businessmen after three Martinis.

While it is the simple and classic Martini that rose to stardom, people have found many ways to add their own twists and flair to give this staple drink a modern new edge. Staying true to its botanical essence, yet mixing in an air of modernity, there are quite a few contemporary versions of the Martini that are definitely worth trying.

The Martini is extremely versatile and can be paired with infinite flavors. After all, mixing drinks is a form of art and is all about taking chances.

If you’re feeling a bit adventurous, then you should try a cucumber wasabi Martini made with gin, wasabi, cucumber, simple syrup, and lemon juice. This cocktail will leave you feeling energized as you indulge in the daring spice of wasabi and the cooling freshness of cucumber. The two ingredients are from opposite sides of the spectrum, yet balance each other out perfectly.

The greatest thing about Martinis is that they’re adaptable: ideal for formal events or for a relaxed afternoon by the pool. Regardless of its slightly muddled history and roots, the Martini has evidently preserved its flavor and class over the decades. Its history may be unclear but it remains loved by many people in every corner of the world. One thing is for sure: its present and future are as clear as a bright day.

Join us at Frankie Bones for an elegant Martini or one of our specialty cocktails. Our mixologists are serious about the craft of making delicious and creative drinks.